Is micro housing just a fad, or is it the future?

Is micro housing just a fad, or is it the future? 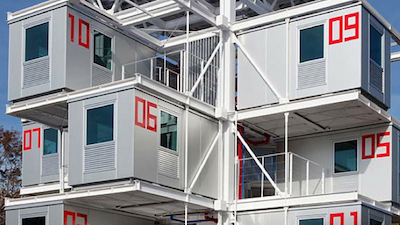 According to the National Association of Home Builders, in 2009 the size of the average American home was two thousand seven hundred square feet. That means for a family of four there would be, on average, six hundred seventy-five square feet of living space per person. Based on these numbers, a single person living in just five hundred square feet (the size of several micro homes) sounds perfectly reasonable, in fact, it sounds like what many people are already accustomed to. Oh yeah, I forgot to mention the part about not being able to have a swimming pool, back yard, barbecue, tree house, tool shed, garage or anything else you would have outside of your home. Since most micro housing is being located in densely populated areas, the people that would live in them have already decided they don’t need any of these things, or have found an acceptable alternative.

However, if you look at the bigger picture it sounds like we are choosing to be packed like sardines into a can. If you take into consideration that there are nearly three million square miles of land in the contiguous United States, and let’s say half of it is either BLM, watershed or national park (that’s a heavy estimate). This leaves us with one hundred and fifty million square miles of good old-fashioned tera firma. The current population of the United States is a little over three million people. Simple math will lead us to the conclusion that there is enough physical land to put only two people on each square mile.

If you put an acorn in a small pot it will still grow just as if you planted it in the forest, with one difference. Like a Bonsai, it will look just like its wild cousin, but it will never reach the height and depth that nature intended it to. It will be forever stunted in its tiny pot, being able to grow only as far as its environment allows let it. Will living in a micro-home have the same effect on the American spirit, stunting it to the point that we will stop reaching further and higher to better it?

The psychological aspects to living in such a small space could easily be found, just go to your local prison. A modern cell is just one hundred square feet and houses two inmates. In contrast, an NCO on a modern army base gets to share two hundred square feet with a bunk mate. Would people choose to live in these micro homes as the result of some deep seeded throwback to our caveman ancestors? Do they feel safer in a confined space from the saber tooth tiger that’s lurking around outside?

In NYC, approximately sixty thousand people applied to live in just eleven available units that are under construction on East 27th St. in Kips Bay, Manhattan. In the movie The Fifth Element, (released in 1997), the 23rd century New York City apartment that Bruce Willis’s character occupied couldn’t have been more than three hundred square feet. It had a bed that retracted into the wall, a shower that stacked on top of a full sized refrigerator and plenty of shelf space. Is that the direction we are heading, hundred story buildings packed to the gills with people?

The answer lies in a simple place, where the money is. If there is a profit to be made there will be funds available to grow the industry from eager investors looking for a percentage. Weather it takes off or not, only time will tell.